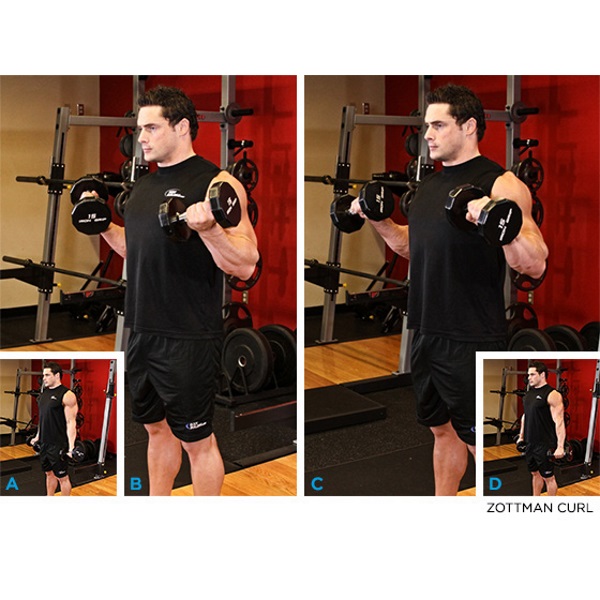 “My biceps are too big!”

These are words that have been spoken by nobody in the history of time.

Therefore, we bring you more biceps training as part of our “Instant Training Tips” series – information that’s designed to be quick-hitting and effective – allowing you to incorporate into your workout TODAY!

It’s Biceps With An S
Ok, first things, first – biceps is plural. It’s not bicep. So if someone is trying to give you biceps training advice and they leave off the S do yourself a favor and run.

The reason it’s biceps with an S is because the biceps are made up of two muscles. Hence “bi” and the “s”.

The two muscles are simply known as the long and short heads of the biceps brachii muscle group, or biceps for short. The reason for the “brachii” part of the name is to eliminate confusion with the “biceps femoris”, which is part of the hamstrings. Clearly this article is referencing the biceps brachii when using the word biceps.

The purpose of the biceps is to act as the primary movers in elbow flexion, i.e. bending your arm. The biceps also assist the shoulder during shoulder flexion (i.e. raising your arm) and are involved in forearm supination (i.e. turning the palm of your hand towards the sky – think screwing in a light bulb).

Biceps Brachii Biceps Anatomy
The biceps have very simple and limited functionality – however, when it comes to impressing folks, good looking biceps are pretty much limitless.

Wrist Position Is Critical
When performing any biceps curling exercise the position of your wrist is very important in determining how much biceps recruitment you’ll get.

The reasoning is simple – your forearm muscles want to help your biceps perform the curl.

In life, this is great. In maximizing biceps recruitment, this is bad!

You’ll want to limit wrist flexion as much as possible if biceps targeting is your primary goal. This is a very common training mistake and very easy to do, especially when using heavy weight.

In order to maximize biceps recruitment in ANY biceps exercise, you should aim for at least having a neutral wrist position.

While a wrist extension position can place even greater emphasis on the biceps, it also can limit the amount of weight you can use and can place undue stress on your wrists.

With that said, it works well for many when used on lower weight/higher rep sets.

This is something to keep an eye on and monitor. Of course, you won’t be able to eliminate forearm recruitment altogether – and most likely you wouldn’t want to – but you do want to be aware of how your body is moving.

One-Arm Barbell Curl
This simple twist on a gym staple completely transforms this biceps exercise because, for example, the weight of that 45 pound dumbbell you were curling is now spread over a greater distance and further from your body.

This causes your biceps to have to work harder to move the same amount of weight.

How To Perform The One-Arm Barbell Curl

Incorporate this exercise towards the beginning of your biceps workout using a rep and set protocol conducive towards your current goals – or – use at the end of your training as a pump tool.

Zottman Dumbbell Curl
This is an oldie, but goodie! Chances are you’ve done it or have seen it done, but have you used it recently?

It’s a tremendous arm blaster and a very efficient movement – hammering both the biceps and the forearms while allowing you to use some pretty heavy loads once you have the movement down.

Be sure to keep a neutral wrist throughout the movement.

Pro Victor Egonu is back to show us a few versions in this video:

The less of an incline (I.e. the closer the bench is towards being flat), the more the biceps are targeted – however your strength will also decrease.

As with all exercises, it’s best to mix these versions up and figure out which ones work best for you based on your goals at any given time.

So there you go – a few biceps exercises for mass that you can add to your training today!