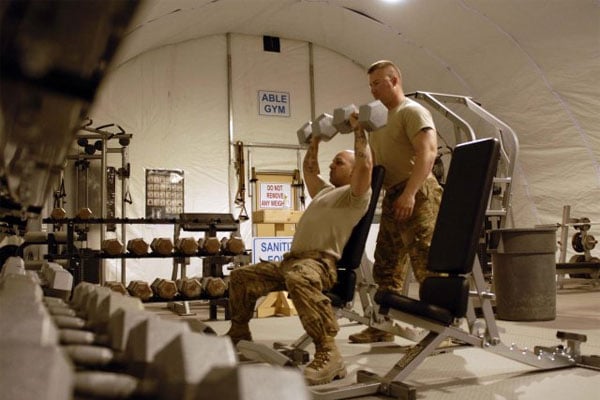 Many of us are familiar with beta-alanine (BA) supplementation for the purpose of enhancing athletic performance via its ability to increase muscle carnosine and buffer acid during intense exercise. Usually this is used to increase endurance, training capacity, and strength which can result in faster race times, more rushing yards, more points scored, etc. However, Dr. Jay Hoffman, a professor of exercise science at the University of Central Florida, recently presented some interesting research on BA supplementation in soldiers where the outcomes shift to combat performance such as shooting accuracy and the ability to carry a colleague from the battlefield.

In a 2014 study, 18 soldiers performed a combat simulation protocol pre and post 28 days of BA supplementation (6g/d of BA or rice flour) [1]. The test began with a 4 km run followed immediately by 5 counter-movement jumps.  Once the jumps were completed, the soldiers put on their gear, including weapon, and performed a 120m sprint to a shooting range where they fired 10-shots (5 kneeling, 5 prone) as quickly as possible at a target 40m away.  During the shooting, each soldier had to deal with a randomly-placed empty bullet in the magazine.  Throughout the course of the study, the soldiers went through advanced tactical training such as hand-to-hand combat, navigational training, and general conditioning.

At the end of four weeks the BA group significantly increased its vertical jump peak power by approximately 1 watt per kilogram of bodyweight versus PL, which did not change.  As for shooting performance, the BA group was able to decrease it’s time per shot on target (expressed as seconds per accurate hit) from 8 to 4.  The PL group did not change (~6 sec/hit) suggesting that the BA group was able to handle the misfire more quickly while still maintaining accuracy.

In a similar trial [2] Dr. Hoffman and colleagues examined the effects of 30 days of BA supplementation (6g/d) on tests of combat specific performance.  Physical testing 2.5km run, 1-min sprint, 50m casualty carry, and five 30m sprints with shooting (3 shots in 5 seconds in between sprints).  After post testing the only difference between groups was the change in time for the 50m casualty carry.  The BA group was able to significantly decrease their time by .3 seconds while the PL group time increased by .2 seconds.

While the vast majority of research on beta-alanine has looked into its ergogenic benefits, there is increasing interest in its ability to enhance cognitive performance under stress and improve conditions of PTSD.  An acute traumatic event is thought to change the structure of neurons in the brain that regulate stress, primarily the hippocampus.  Within the hippocampus, a specific neurotrophin called brain-derived neurotrophic factor (BDNF) is low in those with PTSD.  BDNF plays an important role in neuron remodeling and plasticity which, if present, could help restore neuron structure after a traumatic event.  While treatment for PTSD is a multi-faceted approach, there is animal data to show that a BA supplemented diet can increase both carnosine and BDNF in the hippocampus.

Carnosine is of interest in the hippocampus because it may act as a neuro-protectant via its antioxidant activity which could maintain BDNF expression. In order to add to the literature in this area, Dr. Hoffman tested the efficacy of BA (100mg/kg) in an animal model of PTSD [3].  An acute stressful situation was created by exposing rats to well-soiled cat litter for 15 minutes; a protocol known as predator-scent stress (PSS).  Here is the breakdown of the groups (n= 30 or 31):

To mimic a chronic condition, further tests did not take place until 7 days after exposure.  As expected, the BA groups had elevated carnosine levels in nearly all areas of the brain compared to the PL groups.  For BDNF expression, 3 sub-regions of the hippocampus were analyzed.  In one region BDNF levels were equal across groups.  Another region showed BDNF levels were maintained in the EXP+BA group compared to both UNEXP groups. Conversely, the EXP+PL group experienced a significant drop.  For the final region, BDNF levels were significantly lower in both EXP groups, but the EXP+BA group had a significantly higher concentration than the EXP+PL group.

So BA seems to have maintained BDNF in exposed rats, but how did they fare in behavioral assessments?  To answer this question, Dr. Hoffman utilized an elevated plus-maze (EPM) test.  For 5 minutes, rats were placed in a plus-sign shaped maze with two open ends and two closed ends.  From this an “Anxiety Index” (AI) was formulated that took into account the total time spent in the maze, time spent in the open arms (exploratory, non-stressed behavior), and time spent in the closed arms (avoidance, stressed behavior).  Values ranged from 0 to 1 and higher values suggested anxiety-like behavior.  There was no difference in AI values between the UNEXP groups and the PSS+BA group.  However, the AI value for the EXP+PL group was significantly higher.

Based on the available research in animals, BA could enhance cognitive function under stress.  But what about humans, and soldiers in particular?  In the 2015 trial discussed earlier, Dr. Hoffman employed a serial subtraction test to measure cognitive functioning under a stressful (i.e. battlefield) situation.  Immediately after completion of their 30m repeated sprint with shooting test, participants were given a piece of paper containing a random 4-digit number on top.  For two minutes the soldiers were required to continuously subtract the number 7 as fast as possible while being accurate.  This took place while other participants were performing their shooting test, and the soldier was not told if his answers were correct.  The total number of correct answers was recorded.  In pre-testing, the BA and PL groups provided 27 and 26 correct answers, respectively.  At post testing, the PL did not change while the BA group increased to 32 correct answers.  While this same test was given in the 2014 study with soldiers, it was not proctored in an environment that could induce anxiety.

According to the data presented, BA was able to slightly enhance some measures of performance in tactical athletes. While not all post-test values in the BA groups were better than pre-test values, this may still reflect a positive outcome.  It’s important to remember that during these trials the soldiers are going through their normal training and are being physically and mentally broken down.  In these types of cases, maintenance of performance may actually be enhancement as there were examples of the PL groups’ performance decreasing from pre to post.  The limited animal and human data seem to align with respect to cognitive function under stress, but clearly more research needs to be done and replicated.

From an ergogenic & the typical trainee perspective, I believe BA is a highly situational and somewhat luxurious supplement.  Your training and sport regimen must be a certain way to garner BA’s effects (i.e. continuous or intermittent intense exercise lasting from 15 seconds to a couple minutes). Additionally, while the cost has gone down in recent years I would only recommend using it if your financial situation allows for it.

To contact Korey and read more about him, visit his bio