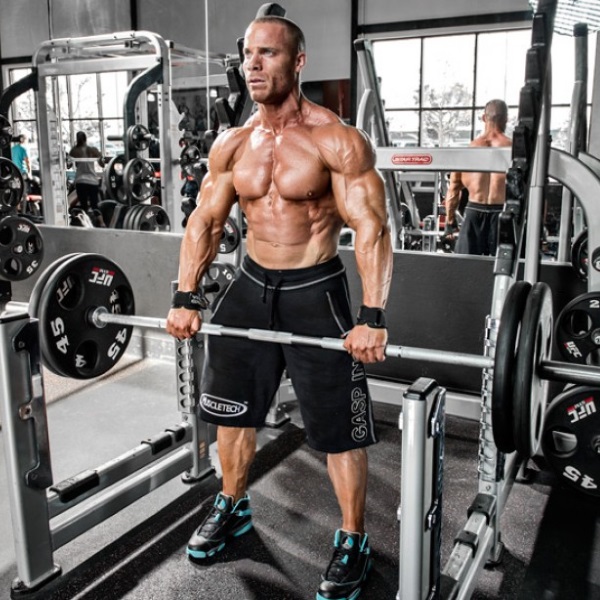 You might remember a few years back I had a deadlift cycle included with an elitefts Make-A-Wish Manual, which I used to hit a series of PRs despite being on a pretty significant diet. Being that time of the year, I’ve been thinking about that cycle and some other things I’ve added lately that have kept my pulls moving steadily up.

My template (below) still follows a bastardized Westside ME/DE split. Before I get to the details and to my rationale for the cycle, this is for gym rats — if you throw this in as a peaking cycle before a meet, you’ll dick yourself over. This is also for lifters who are at the point where they have solid technique and are only occasionally breaking PRs.

My Thinking Behind This

When I sat down to put this together, I had a few core criteria. First, specificity had to increase from microcycle to microcycle. Second, intensity had to increase the same way. Third, I had to make sure no weaknesses developed, e.g., a weak grip caused by too little time with the bar in my hands. Fourth, I needed to make sure my money exercises were near the end where they’d help the most. Fifth and finally, I needed to stay in one piece.

Increasing Specificity: As a conventional puller, I would start the max-effort part of the training cycle with sumo pulls and finish with conventional pulls done from a slight deficit. A sumo puller might invert this format by starting with conventional deads and finishing with sumos pulled from a slight deficit. On the DE day, I started the cycle with accommodating resistance done for speed, but finished with straight weight done for technique. If you’re going for your PR in a belt, briefs, or other gear, make sure you’re wearing it when you transition to straight weight.

Increasing Intensity: This is mainly seen with the ab work. On the template, “heavy” means something like 3×3 or 5×5 (go with what makes you comfortable) and “medium” is more of a traditional bodybuilding range of 3-5 sets of 10-15 reps. Try to add weight to the lifts every week instead of sets or reps. On the ME days, I also recommend not going crazy on the first or second weeks; ideally, you’ll improve between the two weeks without missing a lift.

Prevent Weaknesses: You’ll have to rely on yourself for this one. I mentioned grip being a potential problem above. Say you know you’ll come off the deficit lifts with weak hands because of the reduced weight. In that case, you might want to use timed barbell holds as your ab work, where you’d put your 1RM DL load on a bar just below waist-height and hold it for time.

Money Exercises: Pallof presses have always been great for my deadlift, and deficit deadlifts have lately been my best primers for big pulls. If I were using these in my template, I’d do heavy Pallof presses as my heavy oblique/bracing lifts during my last training cycle and during testing, and I’d use conventional deficit deads (as noted above) as my “money” ME lift during the last training cycle. If you don’t have a go-to money ME lift, a deficit version of your target-stance deadlift is a good option.

Stay Healthy: In the MAW booklet, I incorporated some pre-hab work into the main training cycle, though now I would just put that in the warm-up. TKEs, Bulgarian squats, lunges, Cossack squats, unilateral RDLs, and banded GMs would be my choices here. I’d also wrap up each lifting day with some traction work, like lying on a declined bench with your chin tucked and stomach sucked in slightly. DE Lifts: Feel free to use triples or doubles when using bands or chains, but switch to singles with the straight weight. Also with the straight weight, think more about your technique than about bar speed. Drill in your cues about grip and bracing. My preferred form of accommodating resistance is a short pair of average mini bands with about 60% on the bar.

Leg Press: The 45-degree incline is the best in my opinion. I lean the seat all the way back so I don’t have to worry about remembering where I set it, and I use a range of motion that roughly mimics my pull. Sumo pullers might be out of luck if they don’t have one with a wide toe plate, so belt squats would also be great, or even a platform squat machine if that’s all you have.

Abs-Rectus and Lat Focused: Ab pull-downs, roll-outs, hanging knee/leg raises, and hanging knee/leg tucks are good ones here. Leg and knee raises can help relax your lower back after a heavy pull, so if you’re the type who feels locked up after ME day, try using these exclusively on ME day, and maybe even on the DE day, too.

Upper Back: Face pulls for the win, along with wide-grip seated rows. If you need more direct trap work, pair them with shrugs.

Box Squat: This is used as a leg-developer, so sit way back and way wide.

Back Extension: I’m going to make this the subject of its own article, but for now just know that I’m talking about exercises that dynamically involve the spinal erectors. Reverse hypers are the best-known type of lift in this category, though you can add in any pull where the back starts rounded and ends straight, as well as seated GMs. I honestly rarely use these lifts, and instead prefer to use a 45-degree extension set-up with the pad set high enough to lock my hips. This is easily the most optional part of the template — if you don’t like the idea of flexion under load, stick with a hip extension variation.

Abs-Oblique and TVA Focused: Static exercises that stress your ability to resist motion are the way to go here. The idea is to help you stay tight during the pull. Pallofs are my favorite, but suitcase hold with a heavy dumbbell is another winner, as are shovel deadlifts. Sometimes all my ab work will be heavy Pallofs.

Lat Training: I train a vertical and a horizontal pull on each of my two upper days. If you do lat work only on lower days, my recommendation is to switch things up and try it my way. If you’d rather not, add some work in before your ab sets.