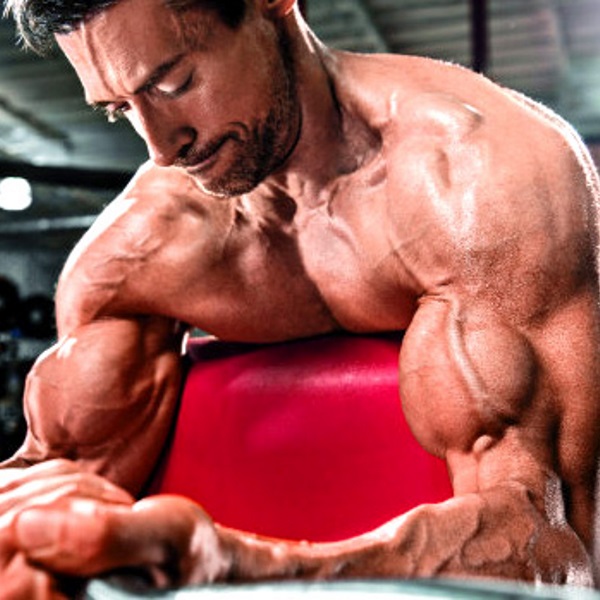 As a very recent paper in Frontiers in Physiology rightly point out, “it becomes more challenging to induce further neuromuscular […], as training experience increases adaptation” (Walker. 2016). When you are hitting a plateau, the only promising option, according to the authors is to seek “alternative training methods in order to further increase strength and muscle mass” (ibid.).
One of the classic methods to do just that is to utilize accentuated eccentric loading, i.e. to apply a greater external load during the eccentric phase of the lift as compared to the concentric phase (e.g. doing concentration curls with a supra-maximal weight, using the free arm to lift the weight up and only the working arm to slowly lower it, afterwards).

In the twin-control group design study, Walker et al. conducted with thirty-three healthy young men had the subjects with 2-7 years of training experience either…

While the subjects in the CON group were not supervised and didn’t have the same strict dietary control, subjects in the AEL and TRAD groups received the same strick ksupervision and were subjects to the same dietary conditions – the real control group is thus not the CON, but the TRAD group, “because subjects are exposed to the same study conditions as the experimental group. The AEL group performed the same training as TRAD but used greater loading during the eccentric phase, as described in detail below” (Walker. 2016). Speaking of which:

TRAD and AEL engaged in two 5-week training periods where training was performed twice a week (Monday and Thursday or Tuesday and Friday, to allow at least 48 h recovery between training sessions). Training consisted of three sets of 6-RM (session 1) and 10-RM (session 2) bilateral leg press and unilateral knee extension and flexion exercises. […] TRAD performed the exercises with the same load for both concentric and eccentric phases, while AEL performed the exercises with 40% greater load during the eccentric phase compared to the concentric phase (i.e. eccentric load = concentric load + 40%) […] In order for each training session to include a true RM, both TRAD and AEL used loads that elicited concentric failure in at least 1 out of 3 sets with the investigator assisting the subject to complete the set.

Figure 2: Illustration of how weight-releasers were used to add add. load on eccentrics (Walker. 2016).

Custom weight-releasers were used to add the additional eccentric load to the leg press exercise (Figure 1, left) while weight plates were manually added and removed by the training supervisor(s) with the use of a custom-built pin for the knee extension exercise (Figure 1, right). Both groups performed the concentric and eccentric phases of the lift with a 2:2 s tempo (i.e. 4 s in total), which was monitored by the investigator” (Walker. 2016). 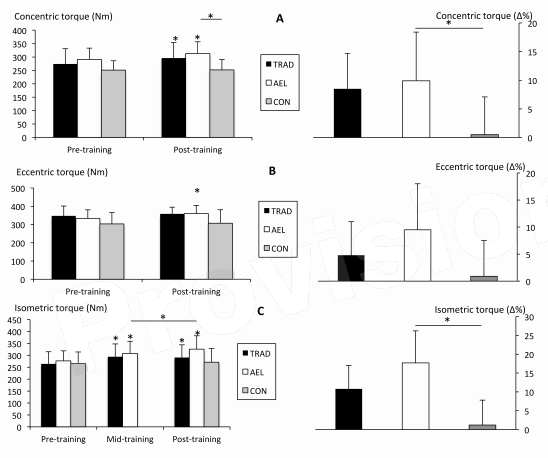 In spite of the identical nutrition and supplementation regimen and the highly similar workout protocols, the maximum isometric torque of the subjects in the AEL group increased significantly more in the accentuated eccentric load group than control (18±10% vs. 1±5%, p<0.01) over whole 10 week study – this benefit was accompanied by, or maybe even facilitated by an increase in voluntary activation (3.5±5%, p<0.05) the scientists analyzed by the means of EMG electrodes.

The study also shows that the eccentric (AEL) regimen lead to sign. increases of the isokinetic eccentric torque (10±9%, p<0.05), while the TRAD group saw only increases concentric torque – increases that were albeit smaller (9±6%; p<0.01 vs. 10±9%; p<0.01; difference 1±7%; p<0.05) than those of the AEL group. And even the knee extension repetition-to-failure improved in the accentuated eccentric load group only (28%, p<0.05). Against that background it is a bit surprising that the authors found “similar increases in muscle mass occurred in both intervention groups” (Walker. 2016). 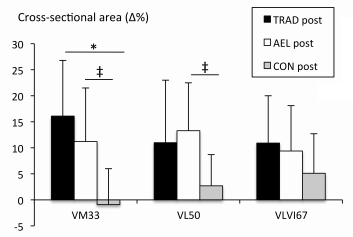 While there was no difference between the size gains in the TRAD and AEL groups, meaning that eccentric training did not promote muscle gains, both forms of training were vastly superior to the subjects’ individual routines (CON).

The above is the indisputable conclusion to an interesting study which also shows that either changing your training or stop training like a bro (i.e. according to your own often over-crowded split routine, like subjects in CON) will yield gains in strength and size you’d never seen if you continued on the same stamped out paths you’ve been pursuing for years. Compared to the effect of this change the add. benefits of eccentric loading are small