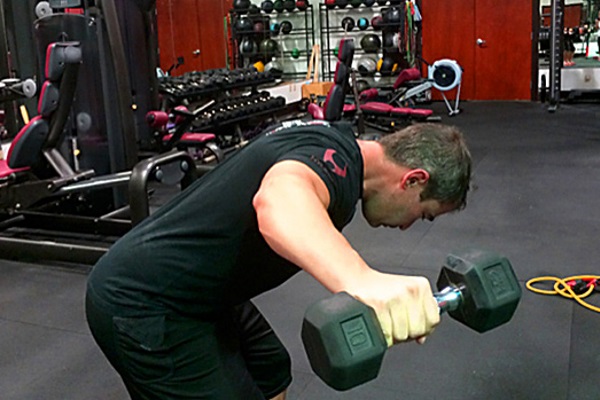 Tip #1 – Do Offset Dumbbell Biceps Curls
Instead of gripping the dumbbell from the middle in the traditional manner, grip it all the way over on the thumb side.

Here’s Why: The biceps are not only elbow flexors, but they’re also wrist and forearm supinators. So if we want to achieve maximal biceps recruitment when doing dumbbell curls, we must involve both elbow flexion and forearm supination. You can do this by holding the handle all the way over on the thumb side. This small change makes a huge difference because this grip forces you to resist forearm pronation because the biceps are forced to act as supinators while also serving as elbow flexors.

Tip #2 – Use a Medium or Wide Grip on Pulldowns
Despite common belief, all grip widths on the pulldown bar will hit your lats, but you can use a medium-width grip to target the biceps more. So just find a width that feels most comfortable to you.

Here’s Why: It’s generally believed that a wider grip on the pulldown bar activates the lats more than a narrow one. This belief originates in bodybuilding dogma, but it also appears to be evidence-based. One study found that the wide-grip pulldown produced greater muscle activity than pulldowns using a closer, underhand grip. The problem is that this study didn’t compare different overhand grip widths.

Luckily, another study compared a 6RM load and EMG activity using three different pronated grip widths. Lifters performed 6RM in the lat pulldown with narrow, medium, and wide grips – 1, 1.5, and 2 times the biacromial distance, a measure of shoulder width. This study found that, aside from a bit more biceps involvement in the medium-grip width, all three grips produced similar lat activation. This challenges the notion that wide grip is “best” for targeting the lats when doing pulldowns.

If your objective is to add in some extra biceps work while doing lat pulldowns, a medium-grip width is just what the muscle doctor ordered. You can mix up grip widths to add subtle variety to your lat pulldowns without feeling as if you’re missing out on the “special” lat building benefit of using a wide grip.

Tip #3 – Use a Neutral, Offset Grip on the Rear-Delt Fly
Use a neutral grip, not a thumbs-down grip, on rear-delt flyes. Hold the dumbbell using an offset grip, all the way to the pinky side.

Here’s Why: Using a neutral grip when doing rear-delt flyes will deliver increased activity of the posterior delts compared to using a thumbs-down grip. This also makes sense from an anatomy perspective because the neutral hand position is more externally rotated than the pronated position, as both the posterior deltoid and infraspinatus muscles are also external rotators of the shoulder. Gripping the dumbbell all the way to the pinky finger side forces you to resist shoulder internal rotation (by using more of your posterior delts as external rotators) while performing the rear-delt fly.

Tip #4 – Use the Right Grip When Bench Pressing
Use a narrow grip on the bar to hit the triceps better. If you’re interested in finding new ways to work the biceps, both wide grip and reverse grip bench presses are great options.

Here’s Why: A 2005 study looked at the influence of grip width (narrow, mid, and wide) and forearm pronation/supination on upper-body muscle activity during the flat bench press. A reverse grip resulted in increased activity for the biceps brachii and the clavicular head of the pectoralis major compared to a standard grip. Also, there was no difference in the activity of the sternocostal head of the pectoralis major between a standard and a reverse grip.

A narrower (overhand) grip increased triceps activity and decreased the activity of the sternocostal head of the pectoralis major over other grip options. A wide (overhand) grip produced more biceps brachii activity than standard and reverse grip widths. The reverse-grip bench press is especially effective as it increases the involvement of the biceps brachii without reducing activity to other muscle groups.

According to the researchers, “Considering the small changes that occur during changes in grip width, the choice of grip position should be determined by the positions athletes adopt during their sport. Sport specificity should supersede attempts to train specific muscle groups.” So it’s all about the principle of specificity, which tells us that the adaptations to training will be specific to the demands the training puts on the body.

Tip #5 – Do Shoulder-Width Seated Rows
Use a shoulder-width grip on a bar instead of using the narrow, V-shaped handle.

Here’s Why: The choice of grip handle you use when performing the seated row can significantly affect your ability to maximize the range of motion, and that in turn affects muscle recruitment.

When you use the close-grip handles, the position your hands are stuck in forces you to cut off the final 2 to 3 inches of the range of motion. You don’t get complete muscle contraction. Using a handle attachment that positions the hands at about shoulder-width apart will allow for a greater range of motion and more bang for your buck.

This isn’t to say that using the close-grip handle is a waste of time or that no one should do them. It’s simply to help you understand that each exercise has its benefits and limitations. And one of the limitations of using the close-grip handle when doing seated rows is that you’re unable to reach the level of contraction that you can get when using a handle that positions your arms farther apart.

If you like close-grip rows for whatever reason, keep doing them. The type of handles you use for neutral-grip seated rows isn’t a “do it this way or you’re wasting your time” type of thing. You can mix up using the close-grip handle with the shoulder-width handle.

Tip #6 – Use a Wide Grip on Upright Rows
Use a wider grip and avoid pulling the elbows above shoulder height.

Here’s Why: A wider grip has been shown in studies to increase deltoid and trapezius activity, and correspondingly, less biceps brachii activity. In addition to maximizing recruitment of the muscle we’re trying to develop, we need to also consider exercise safety. Avoid pulling the elbows above shoulder height.

Studies indicate that impingement typically peaks between 70° and 120° of glenohumeral elevation. Authors of a 2011 paper recommend that asymptomatic individuals elevate their arms during the upright row to just below 90° (shoulder height). Other authors have made similar recommendations, so at least in this case, turn a deaf ear to the full-ROM gods.