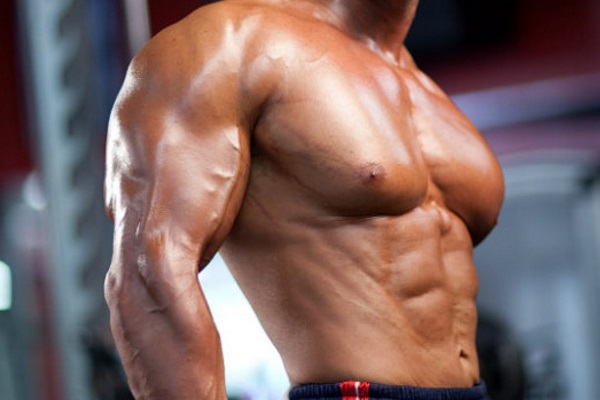 Carb Restriction is Bad News
Insulin can make you fat or it can make you lean and muscular. It all depends on whether you’re insulin sensitive or insulin resistant. Without optimal insulin sensitivity, all that protein you eat never gets delivered to muscle. Instead, a lot of it goes to fat.

Unaware of that physiological fact, people tend to avoid insulin release by constantly eating low-carb diets. Avoidance not only doesn’t fix the problem, it leaves you impaired for muscle growth.

The only smart option is to optimize insulin sensitivity and start using carbs to build muscle. So, instead of worrying about carbs and insulin, make them work for you. Here are five nutritional strategies to use:

Strategy #1 – Eat Protein and Fat First
Whenever you sit down to eat a meal, make sure you eat some protein, vegetables, and fat before you so much as take the first nibble of your ciabatta bread, pasta, or rice. Eating non-carb foods first leads to lower post-meal glucose and insulin levels. So rather than fearing carbs, take away some of their belly-fat potential by putting them at the end of the line.

As an added bonus, eating your foods in the order prescribed will also make you a lot less sleepy after your midday lunch, as eating some protein first will interfere with the production of the sleepy-time neurotransmitter serotonin.

Put Carbs First for Workouts
There’s one time of day when you need think of carbs first, and that’s around your workout. You want an insulin surge going into your workout to maximize nutrient (carbs and fast-acting proteins) uptake into muscle. You need carbs to build muscle efficiently. Don’t forget it.

The Takeaway
To control insulin, eat your protein, vegetables, and fat before you even have a mouthful of carbohydrates. However, during peri-workout meals flip-flop the strategy and have your carbs first.

Strategy #2 – Take Cyanidin 3-Glucoside
Cyanidin 3-Glucoside (C3G) is a naturally occurring anthocyanin found in many varieties of dark-colored berries. When isolated and taken in exponentially larger quantities in supplement form, it has powerful blood-glucose lowering properties.

One of dozens of lab experiments with C3G showed dosage-related decreases in blood glucose of 33% and 51%, prompting the authors of the study to remark how favorably it compared to glucose-disposal pharmaceuticals.

C3G acts a bit differently than other insulin-modulating substances or protocols in that it appears to be a potent AMPK modulator, which ends up increasing glucose and lipid uptake specifically in muscle cells, which is great news for athletes or anyone wanting a better body comp.

Aside from being a powerful glucose disposal agent, C3G also raises adipokinectin levels while decreasing leptin levels, both of which lead to less body fat. People who take C3G can literally ingest more calories and see them partitioned to muscle instead of fat.

The Takeaway
Take 2400 to 3600 milligrams of C3G thirty minutes before your biggest meal of the day or your pre-workout nutrition. Indigo-3G is the most potent form on the market. Most others are greatly underdosed. You can get it here.

Strategy #3 – Pour Vinegar on Everything
Whenever you have a salad, use vinegar as salad dressing. Vinegar not only attenuates the glucose and insulin response from a carb meal, it raises insulin sensitivity.

Several studies have confirmed this, and one study reports that vinegar raised insulin sensitivity at the 60-minute post-meal point by an impressive 34%. It does this because acetic acid (vinegar) suppresses disaccharidase activity, giving it physiological effects similar to acarbose or metformin, two drugs used to treat Type II diabetes.

Another study took 29 people and divided them into three groups: one group with type II diabetes, one with pre-diabetic signs, and one group that was healthy. All were given apple cider vinegar before a meal. The results were pretty impressive:

The Takeaway
Use vinegar on your foods. Or take two tablespoons of apple cider vinegar before your biggest, carbiest, non-peri-workout meal of the day.

Strategy #4 – Take Psyllium Like a Grandpa
Sure, psyllium gives your bowels what I call the Fed-Ex treatment in that you deliver tightly and efficiently wrapped packages absolutely, positively on time, but psyllium also lowers post-meal blood sugar levels.

The Takeaway
Take one teaspoon of psyllium (such as Metamucil) with water twice a day. While there’s some advantage to taking doses before a high-carb meal, the glucose-lowering effects seem to be somewhat independent of meal timing. Avoid taking it before your pre-workout or post-workout meal.

Strategy #5 – Get Your Fish Oil In
Google just about any malady known to man and there’ll either be studies or strong deductive reasoning to support using fish oil as a treatment.

Insulin insensitivity is no different, except for the sheer volume of studies that support its use in ameliorating the condition. The association is so strong, in fact, that fish oil is said to rival the effects of exercise on blood sugar. However, new research conducted on 344 subjects suggested that fish oil, combined with exercise, has a synergistic effect in that the blood-sugar lowering effects are intensified over that of exercise or fish oil by itself.

Furthermore, fish oil is shown not only to make cells more sensitive to insulin, but also to reduce the secretion of insulin by the pancreas.

The Takeaway
For therapeutic effects (blood sugar lowering, inflammation fighting), take a minimum of 3 grams of combined DHA and EPA (omega-3 fatty acids). Again, don’t take them before your pre-workout or post-workout meals, though.