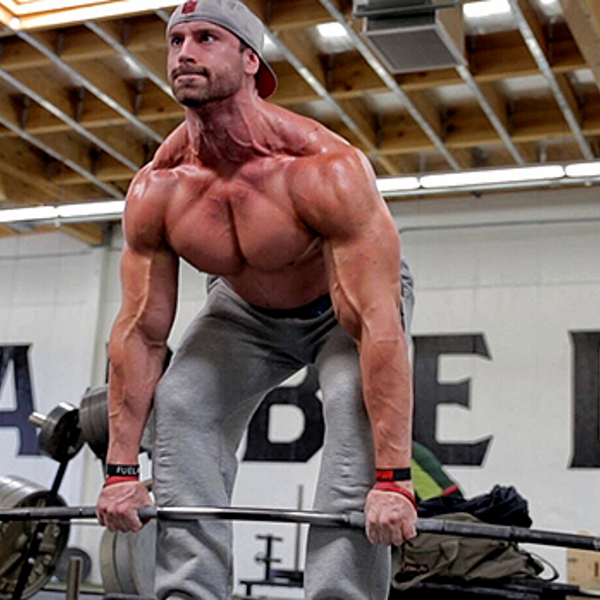 Two Things You Must Know
Want to deadlift more weight? There are two things you need to know:

Find your variation. Everyone is built with different leverages. Some people may be more suited to a conventional deadlift, others to a sumo deadlift. Find which main variation works for you and stick with it.

You should be deadlifting a minimum of once a week if increasing your deadlift is your main goal. You don’t always have to do your main variation, but you shouldn’t go more than a week without performing your go-to deadlift style. Use a variety of rep ranges, anywhere from 1-10 reps works best. More on that later.

The paused deadlift is probably the most underrated variation. Why? Because it’s freaking hard and no one wants to do it! And since most lifters have a sticking point – around knee or at lockout – they should pause just below the knee for two seconds. This will train the sticking point at the knee as well as the lockout. The reason it trains the lockout as well is because the pause at the knee kills any momentum built up from the floor, making the lockout that much harder.

If you happen to have a sticking point just off the floor, pause just as the weight breaks the floor. Perform this movement for sets of 1 to 5 reps. You could perform more reps than that, but try a set of 5 first to test the waters.

3. Deadlift With Bands or Chains

There are multiple versions of the deadlift with bands or chains, and they all accomplish the same goal: training the lockout. You’re pulling against more resistance at the top. But many people don’t have access to chains or band pegs, so a good go-to variation here is the reverse band deadlift.

All you need is a set of bands and a power rack. The key is to hang the bands so that they provide very little tension at lockout, the bands will help you get the weight off the ground, but you’ll be doing most of the work at the top. Use a band that will allow you to deadlift around 15% more than your best deadlift. The top will be overloaded so keep reps between 1 and 5.

There’s a longer range of motion when the bar starts in a deficit. It doesn’t require much. A relatively small deficit of around 2 inches is best. Any more than that and you end up changing the back angle of the movement a little too much. Any less than that and you might as well do regular deadlifts.

Many people think that the deficit deadlift mainly increases your pulling strength off the floor, but it’ll also improve your lockout strength. The increased range of motion makes the entire movement harder from start to finish. This works well with a variety of rep ranges, anywhere between 1 and 10.

When To Use Each Variation
How often you use the variations depends on how many days you deadlift per week. And while some say you can improve your deadlift by training the squat often and only deadlifting every few weeks, that simply isn’t that case, unless maybe you’re a beginner. You should be deadlifting one to three times a week, with twice a week being optimal for most people.

Reps, Sets, and Autoregulation
Use a variety of rep ranges. Determine how many sets to do for a given workout by autoregulating your workout. How? First, work up to a heavy set and then perform drop sets at a given percentage of the top set until you’ve achieved the desired fatigue level. Try leaving around 1 rep in the tank on the top work set and continue to perform the drop sets until there’s around 1 rep in the tank.

Example: Build to a heavy set of 3, drop to 94-96% of top set and perform sets of 3. Here’s what that looks like for a lifter who can do a conventional deadlift around 500 pounds:

To get to his top set, that lifter starts with a couple of feeler sets to get warmed up and gauge how many reps he has left in the tank. You can take as big or small jumps as you like, but I suggest between 10-30 pounds depending on your strength level. To determine how big of a drop you should take, it really depends on how much fatigue you want to create.

Use these general guidelines below to help you:

Using autoregulation allows you to adjust the intensity and volume to your level of preparedness on that particular day. One workout you might feel really good and end up performing 8 drop sets. Another workout might be after a night when you didn’t sleep well, so you might only perform one drop set. Instead of forcing yourself to do a predetermined arbitrary number of reps and weight, autoregulation allows you to train wisely given your strength and energy level on that particular day, bypassing unnecessary fatigue.