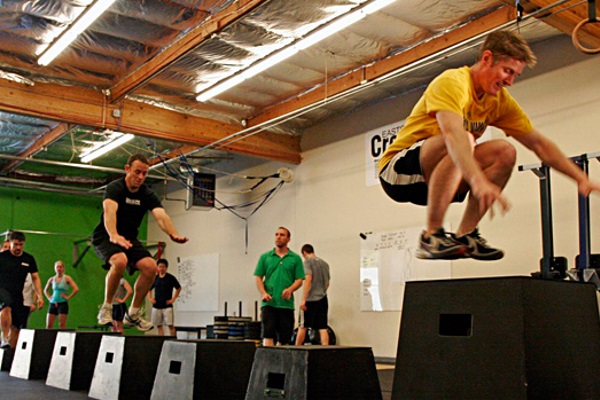 These three training methods are great. Problem is, they’ve been bastardized – totally corrupted, usually because elements have been added that were never there in the first place.

Let’s clear up the confusion and discuss how each method can be used properly.

1.  Plyometrics
The term plyometrics was first coined in 1975 by track & field coach Fred Wilt to describe exercises that had previously been called “jump training” by eastern European coaches.

Since that time it’s been misused and abused in a number of ways by everyone from sports coaches to figure competitors.

How it commonly gets screwed up:

None of the above is a proper definition or use of plyometrics.

Real Plyo
Plyometrics can best be described as “reactive power” training, as plyometrics involve powerful contractions in response to a rapid stretching (eccentric action) of the same muscle and connective tissue.

But let’s make it really simple. A good example of plyometrics in action is the fact that you can jump higher when you take a few steps before a jump.

The more powerful the reflex and subsequent contraction – via the steps before the jump – the more elastic energy is stored in the muscle.

Likewise, the shorter the amortization phase, the more powerful the subsequent muscle contraction will be.

So the ultimate goal of plyometrics is to take advantage of the elastic component of your muscle-tendon unit and utilize the stretch reflex (an involuntary neural event) to achieve as strong a muscle contraction as possible in the shortest amount of time possible.

The Takeaway
A standing broad jump or jump onto a high box are power exercises; they are not plyometric exercises.

So, the plyometric version of a box jump would be to either first jump off of a small box or take a small jump into the air and then, upon landing, minimize your ground contact time and immediately explode onto the high box.

The less ground contact time you have between jumps, the greater the stretch reflex you create, therefore the greater plyometric effect.

Using jumps as power training is purely about improving muscular power, and is based on the height or length of the jump. However, plyometric jumps are about improving the elasticity of your muscle-tendon unit and about refining the stretch reflex.

2.  Functional Training
First off, don’t give me this nonsense about how the word functional is a meaningless term because, as many love to say, “It means different things to different people.”

The word “strength” also means different things to different people, but no one says it’s a meaningless term. That’s called a logical inconsistency.

Let’s stop blindly repeating what the cool kids are saying and start thinking with consistent logic.

How it commonly gets screwed up:

Real Functional Training
The word functional pertains to something having a special task or purpose. So functional training has nothing to do with what the exercise looks like, nor does it have to do with the type of equipment you’re using.

Functional training is all about applying the principle of specificity to improve a specific sporting action.

Alternately, we can use pushing exercises that create whole body stability, which integrate the hips and core along with the upper-body. We’d use these along with traditional exercises like the bench press.

This is because the bench press and the standing press actions common in sports involve very different force production and neuromuscular coordination patterns.

In short, training to improve specific, targeted sports or sports movements by working on improving specific force generation patterns, which transfer into target movement actions, is as legitimate a training concept as you get.

The Takeaway
The further an exercise gets away from replicating the specific force generation patterns of a given movement, the less direct carryover it’ll have to improving the neuromuscular coordination of that movement.

That doesn’t make the exercise bad, and it certainly doesn’t make an exercise “nonfunctional” as many confused people believe. It simply means that the less specific an exercise is, the more general it becomes.

What we’re really looking for is training transfer. Some exercises have an obvious and direct transfer into improved sports performance and overall functional capacity, which can be summarized as how broad your range of ability is. Other exercises offer a less obvious, indirect transfer.

In other words, both types of exercises offer positive benefits. They each benefit interdependent fitness and performance components that the other type of exercise may miss.

The applications we classify as specific exercises, such as the standing single-arm cable press and the one-arm push-up, create a more ideal environment for enhancing the specific force generation and neuromuscular coordination patterns of target movements in athletics than general exercises do.

It’s the same thing powerlifters do with assistance exercises – they use them to improve the bench, squat, and deadlift.

3.  Sports Specific Training
True sports specific training doesn’t happen in the gym. It happens when an athlete works with his coach to practice the specific skills required in the sport.

That said, good strength and conditioning workouts help you to improve upon physical qualities that aren’t addressed from simply playing and practicing your sport, which gives you the physical fitness to do what you need to do when you practice.

Improving your physical fitness doesn’t make you a winner if you don’t possess the skills required to play your sport. Strength and conditioning simply gives you the physical fitness to do what you already know how to do.

All that said, there are a few specific things that can be focused on in a strength and conditioning program depending on the sport, so the concept of sports specific training from an exercise programming perspective does have some validity.

How it commonly gets screwed up. Trainers have mucked up the concept of sports specific training by doing things like adding load to a specific sports skill – such as attaching a resistance band to the end of a golf club or hockey stick and swinging it, grabbing a cable handle and mimicking a swing, or shadow boxing while working against bands that are strapped around the back.

The Reality
Loading specific sports skills, like loaded bats and the like, is a misapplication of the principle of specificity, and therefore a misunderstanding of how to properly use specific exercise applications.

The problem with this is that the movement skills required in sports have accuracy components that are exact. Not similar, exact!

Consider the studies of the use of weighted bats in baseball that found the heavy bat not only alters the batter’s perceptions of bat heaviness and swing speed, but also slows down his actual swing speed for up to five swings after using the weighted bat!

You can only imagine how this type of loading from a cable or band alters sports skills that require accuracy.

As a practical example, instead of trying to load the specific skill of batting or punching, it makes more sense to use a variety of rotational medicine ball throws to replicate the force generation patterns of explosive rotary action.

The sequencing of rotation required in swinging an implement (like a racquet or bat) or throwing a punch is the same. When we take the arms out of the equation – which are responsible for the accuracy component of striking the target – they both involve force production from the ground-up, beginning with the hips, followed by the trunk, and terminating with the arms.

This not only reinforces the need to use specific exercise applications that match the force generation patterns of the activity you want to improve, it also suggests that there should be some sport-specificity when it comes to using power and agility exercises.

Lastly, there are a few sports-specific things you can focus on in the gym depending on the sport.

For example, if you’re in a grappling sport, grip strength can help you better control your opponent. Similarly, grip strength is also helpful for football players to hold onto the ball or make a tackle.

And since grappling/MMA and football are impact sports that demand the use of your neck, specific neck strengthening exercises would be prescribed more often than they would be for other sports that involve less impact and demand on the neck musculature.