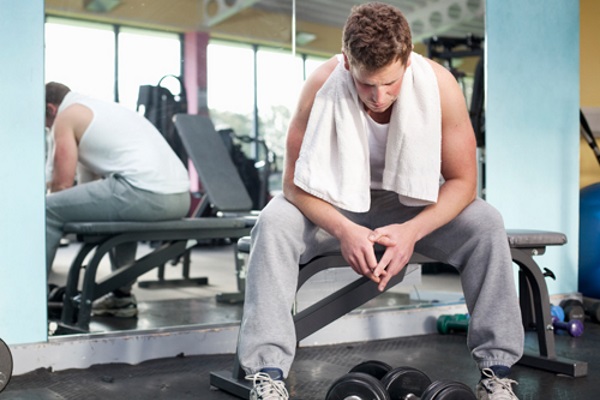 “I haven’t come across anything yet that can’t be cured by getting stronger.”

The above quote is one I stole from Gary Reinl – the anti-ice man – when he presented at CSP a few weeks ago during a staff in-service.

It resonated with me, and save for male pattern baldness I agree with it 100%.

There’s very little that can go wrong with getting stronger. Athletes will typically jump higher, run faster, be able to change direction on a dime, and otherwise dominate the competition in their respective sport. And they’re not the only ones who reap its benefits.

Getting stronger works wonders for regular gym folk (both male and female) as well. While many have a goal to perform better in their recreational basketball, flag football, softball, or Laser Tag league…building a solid foundation of strength bodes well for the more aesthetically minded individual too.

BTW: if you’re actually in a Laser Tag league, I want to hang out with you.

For the most part strength = muscle. Guys who can deadlift 3x bodyweight aren’t small. To steal a train of thought from the great Dan John, women who can perform 5+ chin-ups (I’d even make the case for ONE chin-up) typically don’t need to fret over eating an extra slice of carrot cake.

And to that point, even if someone’s goal is fat loss, the more muscle they have the less “aggressive” they’ll have to be on the dietary side of the equation. This isn’t to imply the process is any easier and that you’re less likely to want to stab someone in the throat from being hangry. But for all intents and purposes, those who have more muscle (and therefore probably a solid base of strength) are in a good spot when it comes to tinkering and dialing things in.

Stronger people tend to be more resilient and don’t get hurt as much either. The saying “strength training can be corrective“ is 100% spot on.

Plus, maybe most germane of all, those who are stronger are generally harder to kill once the zombies eventually take over.

So what are some factors that prevent or deter people from getting stronger?

Omitting the obvious culprits like not staying in tune with the concept of progressive overload, listening to one syllable that comes out of Tracy Anderson’s mouth, or preferring to spend your free time binge watching Netflix, below are a few less common talked about factors.

1. Recovery
I put this first because:

“You’re only as strong as how well you allow yourself to recover.”

Physiologically speaking you don’t get stronger (or bigger) during a workout. You break down muscle tissue and accumulate fatigue.

Both are necessary and it’s what causes the body to adapt and grow more resilient (<– second time using it. It must be the word of the day).

However, it’s how well you allow yourself to recover in between bouts of training which dictates consistent and long-term progress.

This can mean any number of things. It’s hydration, it’s ensuring ample total calories in a 24 hour period (peri and post-workout nutrition pales in comparison2), it’s keeping up with soft tissue quality (foam rolling, occasional massages), and most importantly it’s making sure you go the fuck to sleep.

Nothing kills all the hard work you put in the gym than not getting ample sleep at night.

I can’t tell you how many conversations I’ve had with high-school, collegiate, and professional athletes throughout the years where they’re scratching their heads as to why they’re not getting stronger and why they always feel as if a mack truck as run them over – are they not doing enough sets/reps?, maybe it’s because they’re not taking “x” supplement? – only to find out they’re up until 2-3AM every night playing Halo or flipping left/right on Tinder.

It’s a drastic example, and most reading right now aren’t quite as oblivious.

But this does speak to those of you who stare at a television, computer screen, or iPad for hours leading up to bedtime (or what I like to call nighty nights sleepy time) which then results in less quality rest.

I’m a huge proponent of setting a ritual for bed.

My wife and I bought room darkening curtains to block out as much outside light as possible, and I always sleep with a fan on at night to serve as “white noise.”

In addition I’ll always read in bed. It’s more or less a signal to my body to “shut up.” And to be honest it’s rare that I can get through five pages before I’m nodding off.

Also, to the CrossFitters reading: it’s okay to take a day off occasionally. It works wonders for recovery. And no, going into your box on “free days” to perform a front squat Tabata or, I don’t know, ‘Alejandro’3 doesn’t count.

If you want to do something go for a walk.

2. You’re Lifting Heavy Things Too Much
I know many of you reading are thinking I’m off my rocker with this one, but hear me out.

“Far too many people are concerned with constantly testing their strength (1RM) rather than building it.”
I couldn’t agree more.

For the fun of it, audit yourself.

When was the last time you tested your 1RM in something?

Don’t get me wrong: training in the 85-95% 1RM range IS important from a strength development standpoint. Here we see many positive adaptations, like:

5. Potential for future hypertrophy gains (especially when you revert back to a “hypertrophy” specific training phase).

6. While some argue whether or not the research is efficacious – it goes both ways – lifting heavy things helps to increase serum Testosterone levels.

However, as Greg points out, in some of the most popular strength-based programs out there – 5/3/1, Cube Method, Juggernaut, etc – the bulk of the volume hovers in the 60-80% (1RM) range.

That’s in stark contrast to what many people perceive as the right approach when strength is the goal.

To reiterate: it’s still very important to train heavier than that – and the above programs do include work in the 90% + range – but it doesn’t have to be as frequent as one might think.

Training heavy all the time is going to wear you down after a while. Not only will your joints take a beating, but it’s neurally taxing too, and your nervous system is going to flip you the bird at some point.

In the end, for most people, it’s SUB-MAXIMAL work that needs to be prioritized more frequently. Not only does it allow you to work on honing technique – which in of itself allows people to “express” their strength more effectively – but it helps in building a much larger base so you can attain a higher peak (in strength).

3. Making Stuff Harder For the Sake of Making It Harder
Some people just want to be crushed in the gym, and that’s cool. I appreciate and respect whenever someone likes to work hard and get after it. Here is where I have a TON of respect for CrossFit.

But making an exercise “hard” for the sake of making it hard (or to make yourself feel tired) won’t necessarily equate to better results.

When I write a program I need to be able to back up my rationale for every exercise I have someone perform. It’s easy to make someone tired. Push a Prowler for 30 minutes.

It’s a whole nother ball game altogether to enhance someone’s performance; to get them better. I need to be very particular with what movements and exercises I include given someone’s goals, injury history, and current ability level.

You know the saying “you’re only as strong as your weakest link?” Well, if getting stronger is someone’s goal that’s pretty important.

When most people think “get strong” they look to the big 3: squat, bench press, and deadlift.4

In terms of any accessory movements I include in a program, 95% of them are going to be aimed at addressing some form of weakness or technique flaw in the aforementioned big 3 lifts.

The other 5% is dedicated to bicep curls. Because, biceps.

Not many people get better/stronger using that approach exclusively.