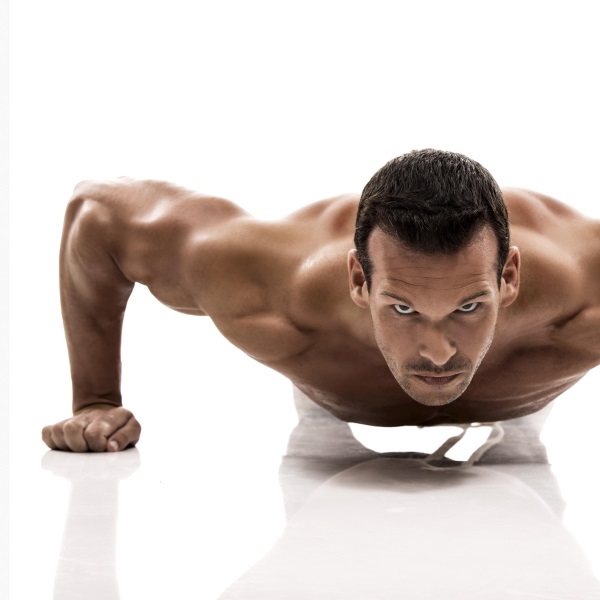 The Push-Up is one of the most basic movement patterns known to man.

It kills me to see people butchering this exercise with absolutely no regard for the long-term health of their bodies.

If you’re an athlete looking to gain strength in your upper body, an avid lifter trying to improve your pushing/pressing movements, or a fitness enthusiast who simply wants to learn the right technique, performing this exercise the right way will confer many benefits in your movement and performance.

Although I see a lot of things go wrong in this exercise, I’ve placed them all into three simple buckets. If you focus on these three areas, I can promise that your body will thank me later.

Here’s a short list of things I see performed incorrectly in this exercise:

Set Your Core to Protect Your Spine
It’s no surprise that having a strong core will increase your push-up strength.

However, you can’t have good core strength unless you know how to create spinal stiffness and stabilization. Once you have that in place, the goal is to keep that spinal orientation throughout the duration of your repetitions.

Have you ever seen an athlete perform a ton of Push-Ups in a row? Let’s just use 50 reps as an example. Watch how their lower back looks during those reps. Most of the time, not so pretty.

Sure, we all should have some degree of extension in our lumbar spine. It’s a natural thing. But if it doesn’t pass the eye test, someone’s going to get hurt.

My general rule of thumb: if it looks like an athlete is performing the exercise with a ton of arch in their lower back (abdomen pretty much dusting the floor), chances are that person is going to get hurt at some point. Do the math:

Save your spine from injury. Check out the tutorial video below, where I demonstrate an easy way to set your core.

Create Tension to Keep Your Shoulders Healthy
How many times have you seen an athlete perform this exercise with their elbows flaring out to the sides?

You’re doing your shoulders no good for long-term health if your elbows flare out to the sides. It places undue stress on the anterior portion of your shoulders and doesn’t let your back muscles do their job.

Another important point: it disengages your abs and lower body, causing you to nosedive forward. Again, not desirable for long-term shoulder health.

Give your shoulders a dose of medicine by creating tension with the use of a mini-band. Place the mini-band around your wrists and don’t let it win. This helps to turn on the upper back and shoulder muscles. It also helps to bring more body awareness.

Check out the technique fix video below to see how to do it.

Use the Concept of “Pulling” Instead of “Pushing”
Scapular protraction is basically a fancy way of saying that the shoulder blades are closer to the sides of the body and away from the middle.

Oppositely, scapular retraction is another way of saying the shoulder blades are closer to the middle of the body and away from the sides.

The whole concept of “pulling” yourself to the floor rather than pushing can be difficult at first. Look past the words though, and focus on the movement. Start by screwing your hands into the floor. Once set, think about spreading the floor. Similar to the second topic, this third point helps to create tension.

Once you’re there, envision pulling yourself toward the floor. Pause at the bottom with your nose ever so close to the floor, and then push the floor away from you.

Language can be powerful, so performing your Push-Ups with these specific cues can help you get away from sloppy form and start performing a healthier version instead.

Check out the video below to learn the concept of “pulling.”