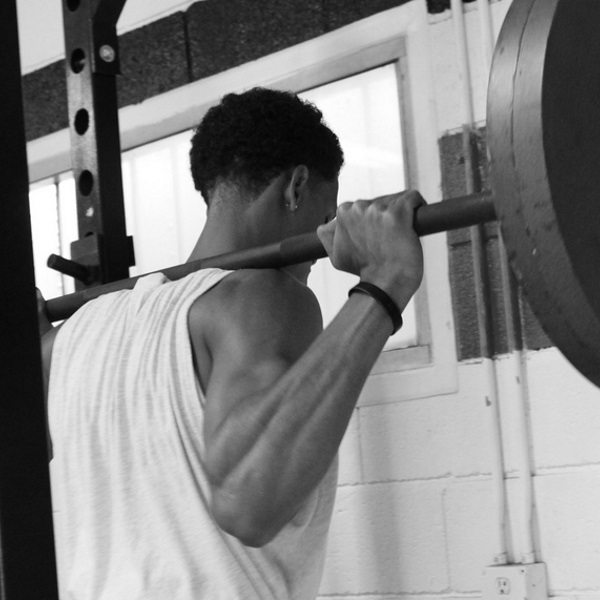 I guess before we dive into the cues it may be cogent, first, to discuss what the squat is…especially for those reading who may be hearing/learning about this for the first time.

1) A weightlifting exercise in which a person squats and then returns to an erect position while holding a barbell at the back of the shoulders.1

2) A place occupied by squatters. Not to be confused as a place occupied by people literally squatting – like a gym, or a really cool house filled with squat racks – but rather, a place where a person settles on a land or occupies property without title, right, or payment of rent. Basically, an a-hole.

3) Nautical. The tendency of a vessel to draw more water astern when in motion than when stationary. Huh, I never knew that!

For the sake of this post, however, we’re going to stick with example #1. I.e., this:

What Is a Squat?
Squats were invented by bears (citation needed), and have long been a staple in weightlifting, strength and conditioning, and powerlifting circles for years and years and years. There’s a reason why most (if not all) successful training programs include squats. They work!

You’d be hard pressed to convince me otherwise that the squat isn’t THE king exercise (definitely top 3) out there that plays a role in helping to increase strength, increase muscle hypertrophy, as well as helping to improve athletic performance. Too, I’d make the case that the squat, when performed correctly to fit one’s unique anatomy, anthropometry, and goals, is one of the best exercises to help “bulletproof” the body and to help offset many of the postural imbalances many people accumulate on a day-t0-day basis from sitting at a desk all day.

Unless you work at the coolest place ever, like in the pic above. Or in space.

Think about what’s required and “needed” in order to perform an acceptable squat (and hit acceptable depth):

To help elucidate my point (regarding depth) lets use the ol’ tried and tested Mike Boyle method of coaching. The this-not this-this method.

Of course many people can hit appropriate depth yet still have all sorts of things go awry.

Without getting too deep into the biomechanics – if that’s your bag I’d suggest Starting Strength or heading over to Bret Contreras’ blog – lets just all agree (I hope) that there’s a degree of ample t-spine extension, shoulder external rotation, scapular posterior tilt, core stability, hip/knee flexion, adductor extensibility, ankle dorsiflexion, and attitude required to perform a good or “passable” squat.

Likewise, while this topic could easily spin into a I’m right/you’re wrong/my way of squatting is the only way to squat everyone, ever diatribe….I want to do my best to avoid the mental gymnastics involved with that. But mostly because it’s dumb.

A case can be made for low bar vs. high bar, wide-stance vs. narrow(er) stance, hands wide vs. hands close, arched back vs. “canister” position for the ribs, and zombies vs. vampires. Everybody is different and different shit is different.

Moreover we could also make arguments for foot flare, shin angle relative to the floor, torso angle, head-neck positioning, and where the eyes are pointing.

A good coach will always place what’s best for the athlete/client before defaulting to his or her’s personal biases with any one way of performing a lift.

With that out of the way…..

What Is Not a Squat?
To steal a train of thought from one of my new favorite books, Guys Can Be Cat Ladies Too, I feel it’s important to take things a step further and discuss what is not a squat. 1) Anything that is not a squat.

2) A deadlift, a person, a cheese sandwich, a Ford Focus, a Blu-ray player, a baseball, a picture frame — none of these things is a squat.

3) Anything else that is not a squat.

Lets Get To Those Cues
As much as my job revolves around improving the performance of the athletes and clients I work with (Example: lets squat a shit-ton of weight), it’s equally important that I play the role of educator and extinguisher of bad habits.

Read: I fix stuff and make it look better.

It’s not that hard to look at someone’s squat and think to yourself:

Step #1, oftentimes, is to put on the brakes and clean up someone’s technique before we begin to worry about increasing load or hitting some kind of tangible number.

What follows are cues that have worked for ME and the clients/athletes I’ve worked with in the past (and present). I am in no insinuating that they’re cemented as “all encompassing,” (for all I know I may very well change my approach next week), but I do feel they bode well for most people looking to hone their squat technique.

What’s more, I also find that if I’m able to get someone to “buy” into these cues that a lot of other things tend to take care of themselves without me even addressing them. Kinda cool.

1) Point Belt Buckle Towards Chin
Admittedly, this is the one cue I may get the most flack for and one which may make people shit a weight belt and un-friend me on social media…but whatevs.

Getting people to appreciate the importance of a “canister” position with their torso and relying less on an aggressive lumbar arch is, in my opinion, crucial.

You’ll notice how there’s an aggressive rib flair in tangent with an aggressive lumbar arch. In PRI (Postural Restoration Institute) circles this is called a “scissor position,” where the two are pointing in opposite directions.

This is not a stable position to be in (and, honestly, open’s up a box of other issues that may need to be dealt with down the road with regards to extension based back pain, Spondy, etc).

Ironically, for the majority of trainees/coaches who adopt this approach – and I used to be one of them – when someone inevitably begins to fall forward on the descent or out of the hole the cue always used is to “arch, chest up, arch, chest up, ARCH.”

Which just feeds into the problem. They’re not stable to begin with!

Now, I am not implying not to arch (nor am I implying not to keep the chest up) The lumbar spine has a natural lordotic curve to it, and I’d prefer to maintain that. All I am saying is that it often works in people’s favor to not OVERarch, cue them to posteriorly tilt the pelvis (belt buckle to chin), and then lock the rib cage down to help maintain anatomical neutral throughout their set.

If I can get someone to accomplish this out of the gate, it’ll make a lot of other things fall into place.

Truth be told: it lends itself to a better and more efficient bracing strategy, which in turn helps with the whole “getting and maintaining” tension thing.

Not only does it help clean up technique for those who are hyper-mobile or lack motor control with their squat2, but it’s also a nice way to address that annoying “butt wink” or tuck under many people exhibit as they go into deep(er) hip flexion.

Cueing someone to “rip the floor apart” and to gain more external rotation torque in the hips is generally a good strategy for most.

Another way to cue people and get the same effect is to say “spread your sit muscles apart,” which is one I stole from Todd Bumgardner. This way people understand that they should be feeling tension in the hips.

Miscellany
Other ones to consider that I’m not going to elaborate on (because I’m hungry):

For any ladies reading, as it happens, next week Jen Sinkler and Jennifer Blake (JVB) are releasing their Unapologetically Powerful resource to help people learn the ins and outs of powerlifting and how accessible it really is for women.

All this week, to help build buzz, they’re releasing a bunch of FREE videos that are excellent resources in of themselves. Today’s video, coincidentally, is on the squat and three variations that can help make it more fail proof.

I just watched it myself and it gets the TG thumb of approval, which looks like this:

All you have to do is go HERE and enter your email (no spam) and you’re good to go.