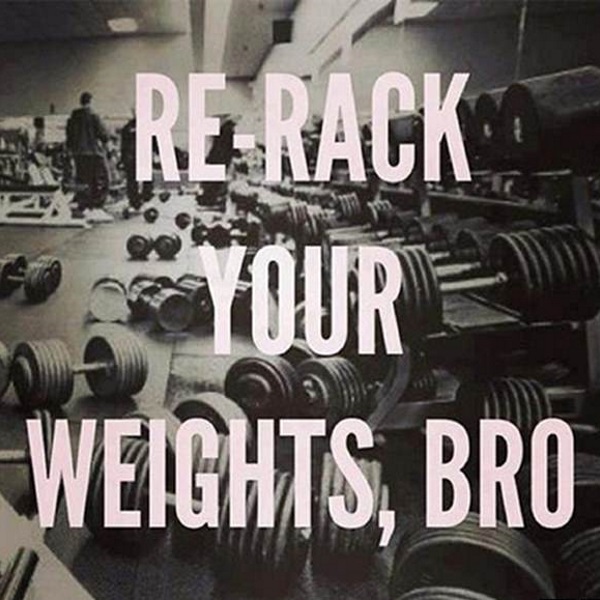 If you are a regular at the gym, it’s most likely that you’ve already met some of the most annoying and/or disgusting members of the human species there, be it the fat guy who constantly breaks wind on the stationary bike, the slob who never re-racks his weights after the workout, the elderly man who never wipes off the equipment he’s been using, leaving small ponds of sweat everywhere around him.

Being constantly pissed off from similar situations, i finally made this list of the most common awful experiences at the gym that i’m sure any average gym-goer can relate to. I hope you won’t find a description of your own behavior, but if you do, give it some thought at the very least!

1. The inarticulate grunting syndrome
Do these guys really think that doing those extremely loud guttural sounds actually convince the rest of us that they are lifting so hard that we should immediately stop our own business and focus on the newly born feelings of pure admiration? Most of the times, it’s just some undernourished non-lifter wanting to gather attention with his demonic grunting that distracts your focus from your own set. Definitely the worst strategy for earning other peoples’ respect.

2. The never-ending ocean of sweat
I’ve come to the conclusion that some people intentionally leave lakes of their own sweat around for others to enjoy. It must be a fetish of some sort. How else would you explain having to constantly clean the equipment from someone’s toxic waste before using it? And still, that yuck feeling never goes away. And how is it even possible for a person to excrete that much bodily fluid without dying?

3. The horrific combination of old men and public gym locker rooms
The terrorizing pig-like behavior of some old people has no limits, that i can assure you. Free of all shame, they can and will push their floppy and filthy body parts far into your personal space. You can find them trying to dry their naked bodies under the hand dryer, splashing nose juice everywhere, farting right under your face or even defecating in the middle of the shower floor. They just don’t give a damn. No further explanation needed.

4. The stalker guy
It’s a fact that every gym has a creepy-looking dude that just sits around and follows your workout. You soon realize that he’s not doing much else in the gym. It often seems like he’s about to make contact with you, but that moment never comes and he keeps on staring at you in a very annoying manner, even after you give him your best look of immediate danger. What kind of a kick does he get from visiting the gym, one will never find out.

5. The crappy radio station
One thing you’re sure to find in a public gym is terrible music on the radio. For some unknown reason, it seems like a lot of people like to work out with the sound of folk music or some swingy tunes, or all kinds of music that doesn’t go well with heavy lifting, for example. Of course, you can always put your headphones on and have your choice met, but then some asshole will come in and turn the radio up so loud that you can’t hear your own thoughts anymore, let alone the headphones.

6. The people who leave their weights all around
If you can lift it, you can put it away! It’s not your private gym, so clean up after yourself. Nobody deserves having to spend fifteen minutes on sorting out someone else’s weights. Show some basic courtesy and leave things like they were before you used them, including re-racking your damn weights.

7. The banging of dumbbells on the floor as hard as possible
Every lifter drops the dumbbells on the floor now and then. It can be safer to just drop them instead of slowly putting them down, especially when you’re doing 100’s or above. Still, this doesn’t mean that you should simply bang them on the ground with all the power you’ve got, like it’s the only way to finish such a glorious set. There are cases of freaks with zero impulse control who have bent dumbbells by slamming them on a floor that’s actually designed for dropping weights on!

8. The people wearing way too expensive and inappropriate clothes
Where’s the logic of wearing really nice and expensive clothes in the gym? You will only end up drowning them in your salty sweat, looking really ridiculous. If you are an endorsed athlete, good for you. If you are very rich, there are much smarter ways to enjoy your lifestyle. And if you are simply flaunting just to get laid, you’ve come to the wrong place my friend.

9. The useless person who annoys everyone else
Besides the stalker guy, with every gym comes the guy who goes there only to talk to the people who train, usually sitting on equipment and blocking the way for someone else. He almost never trains, and if he ever does it, it’ll be extremely sloppy and uncommitted. This fellow goes to the gym to socialize – usually wasting the time of people who actually came there to work out.

10. The attention wh***esattention
Yes, this behavior is not strictly limited to the ladies, but they outnumber the men by 9 to 1. Here are these women who come to the gym dressed in the tightest shorts possible, wearing trainer bras in neon colors and heavy make-up, just to strut around, make selfies and bask in male attention. Sure, they may give you the impression that they want to have sex with you, but all they really want is the attention. They get a kick out of testing their attraction power, and that’s about it. Steer clear of these obnoxious creatures.

There are many other things that deserve to be on this list, but i think this is already a fair portrayal of the common pests and annoyances of a standard gym. The message is loud and clear: don’t do to others what you don’t want done to you. In other words, when you hit the gym, have some respect for other people’s personal space, time and sense organs. Some basic human courtesy will save you a lot of trouble.

Are you familiar with any of the situations described? Feel free to comment and share your own stories about annoying gym behavior!